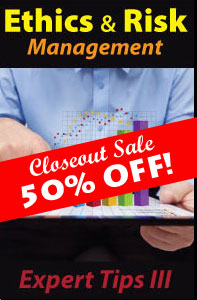 This course addresses a variety of ethics and risk management topics in the form of 14 archived articles from The National Psychologist. Topics include: disclosure of records during a legal proceeding, psychologists as crisis negotiators, boundary issues and multiple relationships, HIPAA changes driven by the federal economic stimulus plan, duty-to-warn, treating "perfect" and "not-so-perfect" patients, documentation and use of the internet, psychological response to recession, child safety online, insurance limits on coverage, positioning for change in the healthcare industry, personal versus professional comments in the media, treating several people who have a relationship, and progress towards DSM-V. This course is intended for psychotherapists of all specialties.

1. Identify the correct response to court orders and subpoenas for patient records
2. List five possible roles for psychologists on crisis negotiation teams
3. Differentiate between a boundary crossing and a boundary violation
4. Describe what the CA CMIA modification means to therapists
5. Identify ways to keep electronic records, and children, safe while using the internet
6. Explain the purpose and limitations of professional liability insurance
7. Describe two ways technology is being used to improve health care quality and efficiency
CE INFORMATION

Jeffrey N. Younggren, PhD, is a clinical and forensic psychologist practicing in Rolling Hills Estates, CA. He is also a clinical professor at the University of California Los Angeles School of Medicine. His e-mail is jeffyounggren@earthlink.net.

Edward Zuckerman, PhD, has worked in community mental health, taught at the University of Pittsburgh and Carnegie Mellon and was in independent practice for almost 20 years. He earned his PhD in clinical psychology from the University of Pittsburgh. Dr. Zuckerman is the author of the best-selling The Paper Office, which contains all the forms and guidance one needs to operate a private practice legally, ethically, and profitably (see www.theclinicianstoolbox.com). Dr. Zuckerman also edits the series of books called The Clinician's Toolbox for Guilford Press.

Disclosure:
Financial: Dr. Zuckerman is an author for Professional Development Resources and receives royalties on sales of his courses.

Elizabeth A. Younggren, JD, Esq, is an attorney at Reback, McAndrews and Kjar, a firm that specializes in medical malpractice defense. She graduated from UCLA with honors and earned her law degree at Loyola Law School (JD, 2004). She is a member of the bar of California; U.S. District Court, Central District of California. Her email is: byounggren@rmklawyers.com
Eric C. Marine is vice president of claims and risk management for the American Professional Agency Inc. He has more than 35 years involved in the insurance claims business and more than 20 years in all facets of professional liability claims. He writes and speaks nationally on the subject.
Disclosure:

Financial: No relevant financial relationship exists.
Nonfinancial: No relevant nonfinancial relationship exists.
Jeanne Wendel, PhD, earned her doctorate in economics from Southern Methodist University and teaches in the Department of Economics of the College of Business Administration at the University of Nevada, Reno. Her email is: wendel@unr.edu.
Larry Rosen, PhD, is the author of Me, MySpace and I: Parenting the Net Generation and TechnoStress: Coping With Technology @Work @Home @Play. He may be reached at: LROSEN@CSUDH.EDU or at his website www.csudh.edu/psych/lrosen.htm.

Disclosure:
Financial: No relevant financial relationship exists.
Nonfinancial: No relevant nonfinancial relationship exists.
Lee Anna Clark, PhD, is a professor of psychology at the University of Iowa. She is a member of the DSM-V Personality and Personality Disorders Work Group, the Impairment Assessment and Instruments Study Group and the Measurement-based Care Study Group, as well as liaison to the Anxiety, OC Spectrum, Posttraumatic and Dissociative Disorders Work Group and the Lifespan Development Study Group. She may be reached by email at la-clark@uiowa.edu
Michael A. Berger, JD, MA, is a California licensed attorney specializing in mental health law while teaching political science and pursuing creative writing.
Michael Bader, DMH, (Doctor of Mental Health, a doctoral degree formerly offered by the University of California, San Francisco) is a psychologist in San Francisco and the author of Male Sexuality: Why Women Don't Understand it – and Men Don't Either. Bader’s extensive writings about psychology and politics can be found at www.michaelbader.com
Scott D. Wylie, PsyD, is a medical psychologist and psychopharmacologist who practices in Northern Colorado. He may be reached at Allosteric1@yahoo.com.
Stephen E. Berger, PhD, ABPP, is a California licensed psychologist practicing in Laguna Hills, Calif. He is on the core faculty at Argosy University Orange County California where he specializes in teaching in the forensic concentration and ethics and law. His email address is: Steveabpp@aol.com

Thomas J. Fagan, PhD, is a licensed clinical psychologist and associate professor of psychology at Nova Southeastern University. He served as director of clinical training and chief hostage negotiator for the Federal Bureau of Prisons. He has written and consulted on correctional mental health and crisis negotiation for federal, state and local law enforcement and correctional agencies. His email is: tfagan@nova.edu