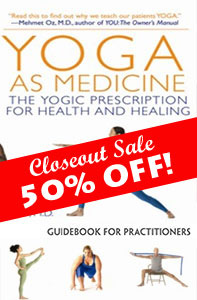 Animal-Assisted Therapy and the Healing Power of Pets

Yoga as Medicine: the Yogic Prescription for Health and Healing

This is a test only course (book not included). The book can be purchased from Amazon or some other source.
This CE test is based on the book "Yoga as Medicine: the Yogic Prescription for Health and Healing" (2007, 592 pages). This course is intended to correct common misconceptions about yoga and to provide a framework for understanding the conditions under which yoga may be beneficial for a variety of health and mental health issues. The general health benefits of yoga are discussed, followed by a discussion of yoga’s role in treating anxiety and panic attacks, arthritis, asthma, back pain, cancer, carpal tunnel syndrome, chronic fatigue syndrome, depression, diabetes, fibromyalgia, headaches, heart disease, high blood pressure, HIV/AIDS, infertility, insomnia, irritable bowel syndrome, menopause, multiple sclerosis, and obesity. This course is intended for health and mental health professionals who have an interest in integrative and alternative medicine.
Closeout Course #80-49 | 51 posttest questions

Professional Development Resources is approved by the American Psychological Association (APA) to sponsor continuing education for psychologists; by the National Board of Certified Counselors (NBCC) to offer home study continuing education for NCCs (#5590); the Association of Social Work Boards (ASWB #1046, ACE Program); the Florida Boards of Clinical Social Work, Marriage & Family Therapy, and Mental Health Counseling (#BAP346) and Psychology & School Psychology (#50-1635); the South Carolina Board of Professional Counselors & MFTs (#193); and the Texas Board of Examiners of Marriage & Family Therapists (#114) and State Board of Social Worker Examiners (#5678).

This test-only course provides instant access to the CE test that enables you to earn CE credit for reading a published course book (book NOT included in your course enrollment). After enrolling, click on My Account and scroll down to My Active Courses. From here you’ll see links to Download/Print or Take CE Test (you can print the test to mark your answers on it while reading the course book).

Successful completion of the online CE test (80% required to pass, 3 chances to take) and course evaluation are required to earn a certificate of completion. Click here to learn more.

Timothy McCall, MD, is a board-certified internist, the Medical Editor of Yoga Journal and the author of two books, Yoga as Medicine: The Yogic Prescription for Health and Healing and Examining Your Doctor: A Patient’s Guide to Avoiding Harmful Medical Care. His articles have appeared in dozens of publications, including the New England Journal of Medicine, The Journal of the American Medical Association (JAMA), Public Citizen’s Health Letter, The Nation, American Health, Redbook (where he was a contributing editor), The Boston Globe, The Philadelphia Inquirer and The Los Angeles Times. His column appeared monthly in the newsletter Bottom Line Health from 1995 to 2003. From 1996-2001 his medical commentaries were featured on the public radio program Marketplace. He writes feature articles for Yoga Journal and columns for the magazine’s online newsletter for teachers, My Yoga Mentor (free subscription available online through Yoga Journal).

Timothy has studied yoga since 1995 with Patricia Walden, a teacher of classical Iyengar yoga. More recently, he has been working with Donald Moyer and Rod Stryker. In addition, Timothy travels regularly to India to research yoga, yoga therapy and Ayurveda, and to study with a traditional Ayurvedic Vaidhya (doctor) in Kerala and a Tantric master in Bangalore. In 2004-2005, he spent a year as scholar-in-residence at the Kripalu Center for Yoga and Health in Stockbridge, MA.

Timothy is a Phi Beta Kappa graduate of the University of Wisconsin in Madison, where he also attended medical school. After completing his residency in primary care internal medicine, he practiced for more than 10 years in the Boston area before devoting himself full time to writing and research. His main focus since the year 2000 has been investigating the therapeutic aspects of yoga, as well as the scientific explanations of yoga’s effects. He currently lives in the San Francisco Bay area, and gives lectures, seminars, and yoga workshops around the U.S. and internationally.