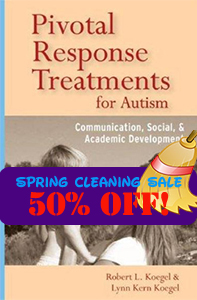 This is a test only course (book not included). The book can be purchased from Amazon or from some other source.

This CE test is based on the book "Pivotal Response Treatment for Autism: Communication, Social, & Academic Development" (2006, 296 pages). Recognized as one of the top state-of-the-art treatments for autism in the United States,* the innovative Pivotal Response Treatment uses natural learning opportunities to target and modify key behaviors in children with autism, leading to widespread positive effects on communication, behavior, and social skills. The product of 20 years of research from Robert and Lynn Koegel — co-founders of the renowned Autism Research Center at the University of California, Santa Barbara — this proven approach is now clearly presented in one accessible book. Keeping parents involved in every aspect of behavioral intervention, therapists and educators of children from preschool to elementary school will use the research-supported PRT strategies to advance children’s communication and language skills, even in extremely challenging cases; foster social interactions and friendships with typically developing peers; reduce disruptive behaviors by combining functional assessment with self-management strategies; aid early identification and intervention; reduce ritualistic behaviors and broaden children’s interests; and improve children’s performance in school activities and on homework assignments. Because PRT works with each child’s natural motivations and stresses functional communication over rote learning, this comprehensive model helps children develop skills they can really use. With this timely resource, educators and therapists will support children with autism as they enjoy more positive interactions, more effective communication, and higher academic achievement in natural, inclusive settings.
Course #70-12 | 30 posttest questions

1.Differentiate core areas that are addressed with the Pivotal Response Treatment (PRT) for autism
2.Identify ways in which families are critical for both the design and implementation of treatment for autism
3.Distinguish aspects of PRT that address a child’s development of communication and social interactions
4.List procedures for developing speech in nonverbal children
5.Identify methods for promoting a child’s positive interaction in both the home and social environments
6.Name research-based strategies that result in an integrated approach to treatment of autism
CE INFORMATION
Professional Development Resources is approved as a provider of continuing education by the Association of Social Work Boards (ASWB #1046); the National Board of Certified Counselors (NBCC #5590); the American Psychological Association (APA); the National Association of Alcoholism & Drug Abuse Counselors (NAADAC #000279); the Florida Board of Clinical Social Work, Marriage & Family Therapy, and Mental Health Counseling (#BAP346); the California Board of Behavioral Sciences (#PCE1625); the Texas Board of Behavioral Sciences (#114); the South Carolina Board of Professional Counselors and Marriage & Family Therapists (#193); and the Ohio Counselor, Social Worker and Marriage & Family Therapist Board (#RCST100501).
COURSE DIRECTIONS

This is a test only course (book not included). The book can be purchased from Amazon.

Disclosure: No commercial support was received for this CE activity.
About the Author(s)

Lynn Kern Koegel, PhD, is Clinical Director of Autism Services at the Koegel Autism Center at the University of California, Santa Barbara. She has been active in the development of programs to improve communication in children with autism, including the development of first words, development of grammatical structures, and pragmatics. Dr. Koegel is co-author and co-editor of major textbooks on autism and positive behavioral support and is co-author of the bestselling book Overcoming Autism: Finding the Answers, Strategies, and Hope That Can Transform a Child’s Life (Penguin, 2004). In addition to her published books and articles in the area of communication and language development, she has developed and published procedures and field manuals in the area of self-management and functional analysis that are used in school districts throughout the United States and have been translated in most major languages used throughout the world. Dr. Koegel is actively involved in providing support and intervention services in school districts, both locally in California and throughout the United States. She has also been featured in news reports on television stations throughout the United States and is a consultant for the internationally broadcast ABC television series Supernanny.