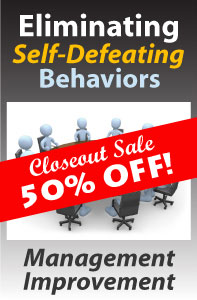 Writing it Out: Journaling as an Adjunct to Therapy

This course was originally designed for managers at 3M Corporation. 3M wanted an effective model of behavioral change to eliminate defects—self-defeating behaviors—in their management style. The course is educational. First, participants learn the model, and then apply it to a specific self-defeating behavior. The outcome is a positive behavioral change. Following the course, participants will be able to identify, analyze, and replace counter-productive manager behavior(s) with high performance behavior(s).

Professional Development Resources is approved by the American Psychological Association (APA) to sponsor continuing education for psychologists; by the National Board of Certified Counselors (NBCC) to offer home study continuing education for NCCs (#5590); the Association of Social Work Boards (ASWB #1046, ACE Program); the Florida Boards of Clinical Social Work, Marriage & Family Therapy, and Mental Health Counseling (#BAP346) and Psychology & School Psychology (#50-1635); the Ohio Counselor, Social Worker & MFT Board (#RCST100501); the South Carolina Board of Professional Counselors & MFTs (#193); and the Texas Board of Examiners of Marriage & Family Therapists (#114) and State Board of Social Worker Examiners (#5678).